Are you looking for an activity which: Enables your young child/ children to have fun with other children whilst hearing and being exposed to another language? Gives you the opportunity to hear and perhaps learn something about another language and culture? A chance to chat and connect with other families on an adult level?

Spielgruppe is the perfect place to immerse your children into the Barossa’s German roots, while having fun at the same time. The Barossa Spielgruppe is a playgroup suitable for children 0-5 years. Kids and parents/ carers alike come together to play, make crafts and sing with a connection to the German language and traditions. The playgroup is run by the Barossa German Language Association Inc. and the co-ordinator is Steffi Traeger.

Cost: $5 per family per session to help cover cost of venue and incidentals 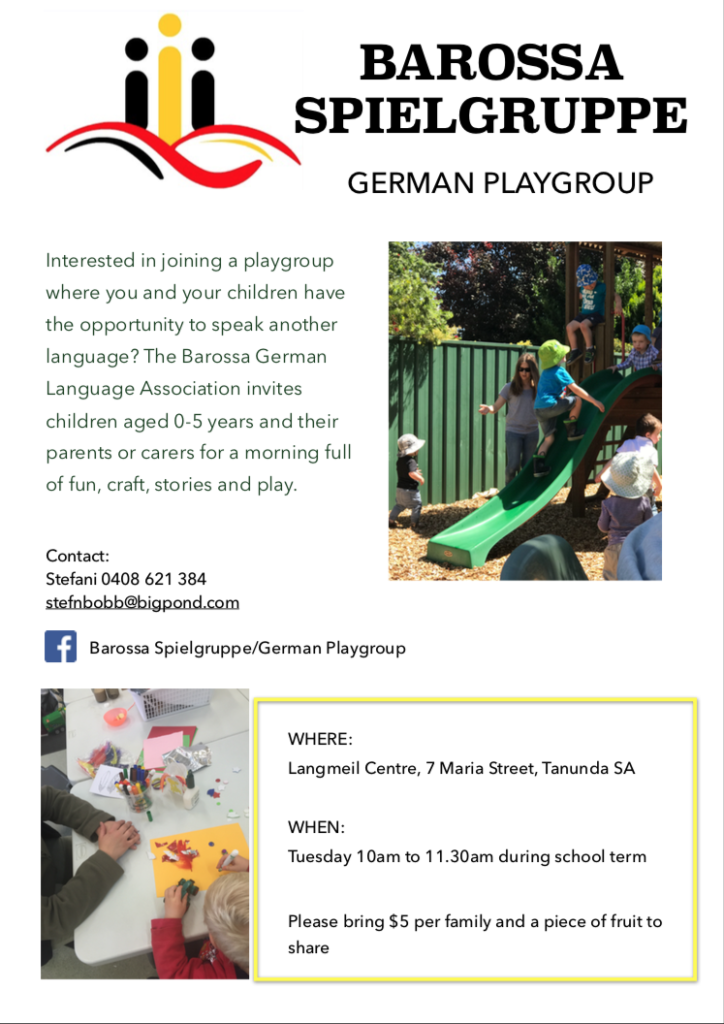 Hi, let me introduce myself. My name is Steffi Traeger and I am the Chair of the Barossa German Language Association Inc.

I was born in Ansbach Germany and came to Australia in 1952 as a 5 year old child with my mother. I have lived in South Australia since then and in the Barossa Valley for about 40 years, the last 20 or so in Nuriootpa. My German connection therefore is as a Migrant, not as a descendant of old “Barossa Deutsch” stock. German was my first language and, growing up within a close-knit German community in Adelaide where German was spoken at home and on social occasions, I have always been able to understand, speak and read German. Having family in Hamburg and being able to visit several times, has helped me keep my knowledge of the German language.

I have been involved in the BGLA for the past 5 years and as well as being Chair, I co-ordinate the Spielgruppe (Playgroup) and am involved in the Singkreis singing group.